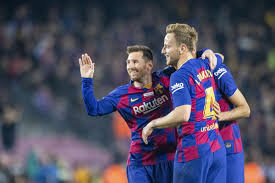 Ivan Rakitic admitted that he had never been close friends with Lionel Messi or Luis Suarez during his time at Camp Nou.

The Croatian playmaker ended his six-year term in Catalonia at the start of the transfer window by joining former club Sevilla for a discount.

There have been reports that Rakitic is incompatible with the Barça star pair, but while he admits they are not close, he says he has nothing but respect for them.

“I told myself my country,” Rakitic told El Desmarque. “My relationship with them has never been close friends. I think it’s difficult in a group of 23 or 24 players.

“But I respect them both. They have been my teammates and very important players for six years. I always get along very well and I have great respect for them.

“During the coronavirus blockade we were all very close, almost neighbors. I am very grateful for the way you have treated me over the years.”

After returning to the club, where he spent four productive seasons between 2011 and 2014, Rakitic will focus entirely on his commitments in Seville after announcing his retirement from international football.

“Leaving the national team was the toughest decision of my career, but I feel this is the time I have to break through and make that decision,” he said in a statement.

“I enjoy every match I play with my country and the unforgettable moment at the World Cup will become one of the favorite memories in my life.”

You can also read about this   Japan offering IMF scholarship

Rakitic played 106 times for Croatia, scored 15 goals and reached the final of the 2018 World Cup.