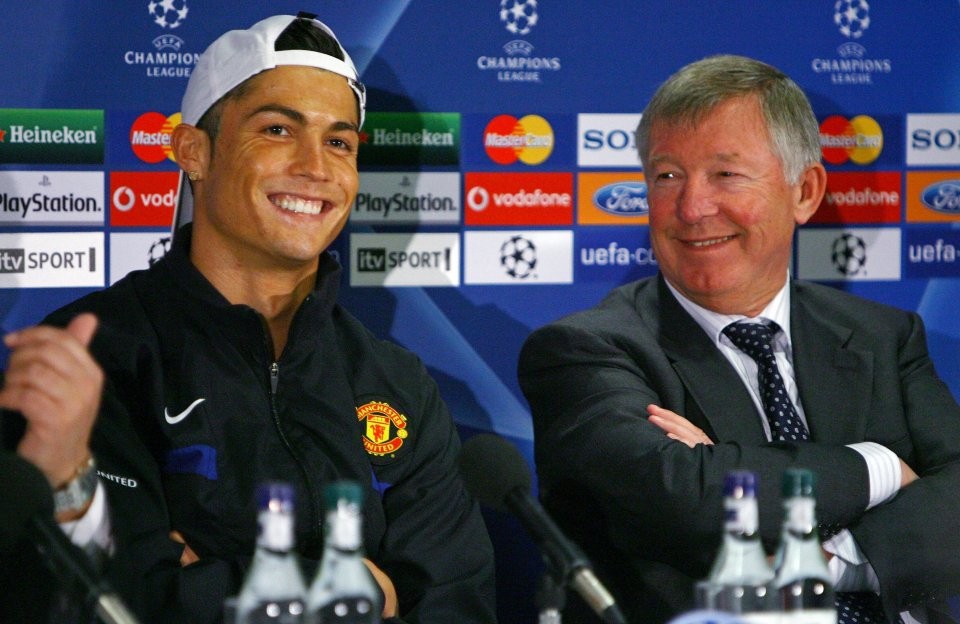 As of the last few days the majority of Manchester United fans have been in dreamland. One of their greatest ever players is back.

Cristiano Ronaldo is once again a Manchester United player – 12 years on from ending his six-year trophy-laden spell there.

In his first spell at Old Trafford, Ronaldo arrived as a boy and left as a man under the tutelage of legendary manager Sir Alex Ferguson.

The bond those two built remains as strong as ever. Rather than a manager and player relationship it’s more akin to a father and son bond.

Speaking about why he re-signed for the club, Ronaldo was gushing in the role that Ferguson played.

‘As everybody knows, since I signed at 18, Sir Alex Ferguson was the key,’ he told MUTV.

‘I remember when we played against Manchester when I was at Sporting Lisbon. For me, Sir Alex Ferguson is like a father in football for me. He helped me a lot, he taught me many things, and in my opinion of course he had a big role because the relationship that we had, we keep in touch all the time, and he’s an unbelievable person.

‘I really like him a lot and he was the main key for me to be in the position that I am, that I signed for Manchester United.’

These words followed an Instagram post which Ronaldo completed with the sign-off: ‘Sir Alex, this one is for you…’

The story as to how Ronaldo came to United in 2003 from Sporting Lisbon is well-documented and in those following years Ferguson always looked to protect his star – whether that be while playing for Manchester United or if he was away from the club.

During his early years Ronaldo was often criticised for being a ‘one-trick pony’ due to his excessive use of stepovers, and of being a ‘diver’, but Ferguson helped hone his craft.

At the start of the 2005-06, Ronaldo was dealing with personal problems when his father Jose Dinis Aveiro fell ill in hospital due to years of alcoholism.

You can also read about this   Match build up: Spain vs Poland

Without hesitation Ferguson told the then 20-year-old to take compassionate leave – even if meant that he would miss part of the season.

Speaking in 2015, Ronaldo reflected: ‘I remember, the thing that is in my memory, the time my father was sick in hospital very bad, in a coma, and we were in a tough moment in the season.

‘We had important games in the Champions League and league, and I said: “Coach, I need to go and see my daddy, I don’t feel good, I want to see my dad.” I was a key player, a very important player. He said: “Listen, your family is the most important thing you have in your life. If you want to go three days, four days, five days, you can go.” When he told me that I feel like: “This guy is unbelievable.” This is why I love him.’

‘This moment is what I keep with me, because it was the most important moment of my life. For me he is the best coach I ever had.’

Ronaldo added: ‘It was a family with him in Manchester United. He made me feel like: “Cristiano, this is your house.”‘

That season ended with silverware as United won the League Cup – with Ronaldo scoring the third in a 4-0 victory over Wigan Athletic in the final.

The No 7 was building an exciting youthful forward partnership with Wayne Rooney, who scored twice in that showpiece, but that summer the two would be involved in a heated spat during the 2006 World Cup in Germany.

Rooney was sent off for a wild stamp on the privates of Ricardo Carvalho during England’s penalty shootout quarter-final defeat by Portugal. As he was given his marching orders, Ronaldo was seen giving a wink towards the sidelines – making him public enemy No 1 among England fans.

Ronaldo was vilified on these shores and agitated for a move but Ferguson convinced him to stay and ride it out, just as he had helped David Beckham get through the unprecedented backlash against him after the 1998 World Cup. It worked as Ronaldo helped guide United to their first Premier League title since 2003, scoring 17 times in the top flight.

You can also read about this   Cristiano Ronaldo gets his favorite shirt number.

The 2007-08 campaign included more glory with a Premier League and Champions League double, with Ronaldo scoring United’s goal in the 1-1 draw with Chelsea (although he did miss his penalty in the shootout victory that followed, and was only reprieved by John Terry’s infamous slip when taking what would have been the winning spot-kick). Feeling he had won everything in England, Ronaldo – who won the Ballon d’Or later that year – yearned for a move to Real Madrid that summer.

Ferguson held firm and promised Ronaldo the move in 12 months’ time if he delivered for the club. He did so once again as United won a hat-trick of Premier League titles.

An £80million transfer to Real – which was a world record at the time – in July 2009 followed. Despite being over 900 miles apart the pair still had a close relationship.

At the unveiling of a statue of Ferguson at Old Trafford in 2012, Ronaldo made an appearance by video link to pay tribute to his former boss.

Apologising for not being there in person due to his busy schedule, Ronaldo hailed his former manager before then making a light-hearted joke.

‘I hope to see you soon, because I need to practise my English, not my Scottish!’

A year later, Ferguson was the special recipient of the BBC Sports Personality Diamond Award for the show’s 60th edition.

Again, Ronaldo was on hand via video link to praise the iconic Scot.

‘You were like a football father to me,’ he said. ‘You deserve this award because you are a fantastic manager, a fantastic person and the No 1.’

You can also read about this   Dortmund wants donyell malen

Wherever possible Ferguson was always there to support Ronaldo. In 2015 the pair were stood together on the red carpet for the London premiere of the former’s ‘Ronaldo’ documentary.

Beaming with pride, the duo almost looked like father and son.

Since Ferguson’s retirement from management in 2013, it seems he has always been there to celebrate with Ronaldo his biggest achievements.

He waited to congratulate Ronaldo and his Portugal team-mates on winning the Euros in 2016 – with the duo having a heart-warming embrace in the aftermath at the Stade de France.

And he was also present at the 2017 Champions League final in Cardiff when Real claimed their 12th European title, with the by now five-time Ballon d’Or winner centre stage. Ferguson even spent some time with Ronaldo’s son Cristiano Jr too.

In May 2018, Ferguson suffered a brain haemorrhage and Ronaldo was one of the football fraternity to send their support.

Sharing a picture of them together, Ronaldo posted on Instagram: ‘My thoughts and prayers are with you, my dear friend. Be strong, Boss!’

Thankfully, Ferguson recovered and they were once more reunited during the 2018-19 Champions League when United were paired with Juventus in the group stages.

Sharing another photo together, the pair were beaming as Ronaldo wrote: ‘A great coach and above all a wonderful man.

‘Taught me so many things inside and outside the pitch. Great to see you in good shape, Boss!’

Now their relationship has come full circle again at the Theatre of Dreams. Although Ferguson won’t be managing, he’ll be watching his prodigal ‘son’ with immense pride as he wears the red of Manchester United once more.

And when Ronaldo does get off the mark for the club in his second spell, don’t be surprised if he says: ‘Sir Alex, this one is for you…’