OFFICIAL: Brazil vs Argentina is suspended 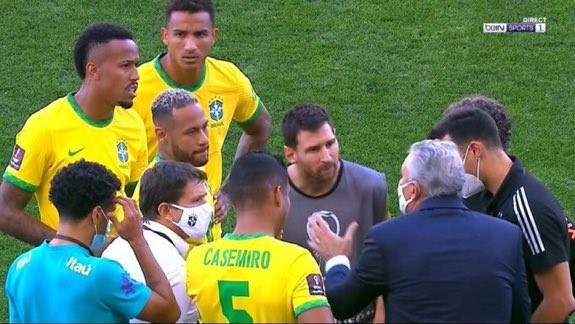 The two South American rivals kicked off at the Corinthians Arena, but the match was just minutes old, before Brazilian health authorities walked onto the pitch to demand a postponement.

Their objection refers to controversy surrounding Covid-19 quarantine rules for four Argentina players based in England.

The former three players all started for Lionel Scaloni’s side with Lionel Messi leading the Argentina players off the pitch amid a pitchside melee.

Updates are expected from match officials in the coming hour with officials in Brazil claiming the Argentina players involved could face arrest for breaking Covid-19 laws.

Argentina have disputed the claim stating the warning was given shortly before kick off with no specific guidance on the necessary steps to take.

CONMEBOL Statement: “By decision of the match referee, the match organized by FIFA between Brazil and Argentina for the World Cup Qualifiers is suspended.”

“The referee and the match commissioner will submit a report to the FIFA Disciplinary Committee, which will determine the steps to be followed. These procedures strictly adhere to current regulations.”

“The World Cup Qualifiers is a FIFA competition. All decisions concerning its organization and development are the exclusive power of that institution.”

Messi: ‘They could have removed us 3 days ago since we arrived’

Leo Messi heard on live television: “They could have removed us 3 days ago since we arrived. Why did they wait for the game to start for them to do this? This is a total disaster. It’s a circus.”

You can also read about this   Camavinga trains with his new real Madrid teammate.